The Special Verbs tab, allowing access to all of the functions of the Karma mechanic in a single place. Additionally, you can also enable or disable the receiving of Karma here.

Karma, in essence, is an in-game currency that allows players to unlock items from the Karma Shop. Each player will have a unique Karma count which can be viewed through the Special Verbs tab in the verb action menu: (Special Verbs => Check Karma.)

As discussed above, every player on Paradise has a Karma balance. Depending on your progress within the server, this could be pretty large or nothing at all. So, how do you start making bank?

Well, Karma is awarded by your fellow crewmembers (dead or alive) for numerous reasons, though most commonly and in no particular order:

Conversely, you may come across moments like this from other players who you feel deserve applause for their efforts. Spread the love; award them some Karma!

You can award a player Karma in two basic ways:

You may only award a single point of Karma per round, so choose wisely!

Remember: Karma is subjective. You'll sometimes come out of a round having not been awarded any. Be patient! Make yourself known, interact with other players, master that role. There is absolutely no rush.

To spend your newly-acquired Karma, proceed to the Karma Shop, opened by clicking on the Karma icon at the top rightmost portion of the window. 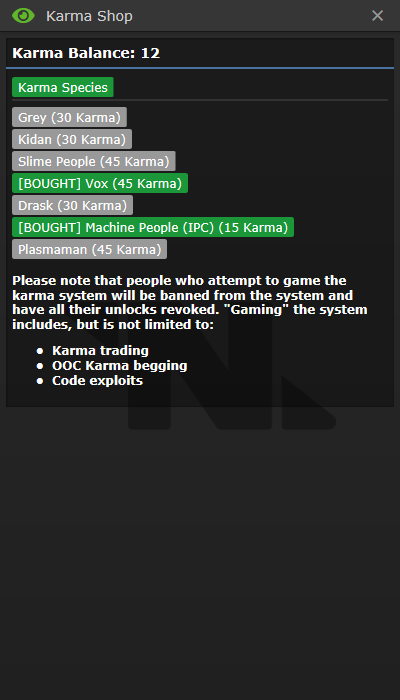 The species unlock panel. As you can see, this user has 12 available Karma points and has previously unlocked two of the available items.

Items in the shop range between 15 and 45 Karma points, and once acquired the item will turn green. Obviously gaining upwards of 45 Karma points is no easy feat. It will take time.

On the plus side, points cannot and will not be deducted from your balance without your input.

Now for the "legal" side of things. There's rules for everything, this ain't any different - so buckle up and pay attention.

Any attempts to "game" or cheat the Karma mechanic is against the rules of the server.

The system is designed to reward active and engaged server members, it's not to be used for farming with your mates. It goes without saying that abuse of the mechanic can and probably will lead to you being banned from the system or result in a full-on server ban.

Since the retirement of job roles within the Karma Shop, its only function at the moment is to unlock in-game species that are otherwise unplayable.

The Karma unlocks below were removed from the shop at various different times for various different reasons too numerous to go into. They're gone, and it's unlikely they'll be making a return here since Karma jobs are no longer used on Paradise. Regardless of how many you had unlocked, every item purchased will have been automatically refunded for the respective amount you bought it for.

The Barber, Blueshield Officer, Nanotrasen Representative and Magistrate all still exist within the game. The latter three are now locked behind playtime in a specific department rather than a points system.

Note: The Ambassador varied through species, a refund will have been processed for each variant unlocked.