1.1 All that fall under one of these three categories must abide by Space Law while contracted by Nanotrasen as dictated by the Nanotrasen Board of Directors(NBD).

1.2 Any subjects that do not fall under one of these categories are NOT considered crew, and therefore, not protected by Space Law.

1.3 Nanotrasen Central Command, in any case, is above Space Law and can demand situations be handled at their behest.

((((Great cases of RP may excuse certain crimes. Adminhelp if you wish to intentionally break a law. Just remember, you may get fired if you can't cover it up.))))

2. The roles on the station that heavily revolve around Space Law are roles like Security Officer, Detective, Internal Affairs Agent, Warden, Head of Security, and Magistrate. These are the protectors of the station that oversee that all departments are following Space Law, and in some cases Standard Operating Procedures. Roles like Warden, Head of Security, and Magistrate are key figures that are not only in charge of their department, but also ensuring the station is running smoothly and all procedures, laws, and crimes are being dealt with appropriately.

2.1 There are lots of factors to take into account when crimes are committed. One important one being intention. This can be the deciding factor between execution or perma, a prison sentence or a warning.

2.2 Space Law was established by the NTBD to help the crew, not hinder them.

2.2.a For example, if someone breaks into EVA while nuclear operatives are attacking the station, you shouldn't arrest them for Major Trespass.

2.3.a It is important you do these with haste and precision as not to waste anyone's time.

3. A suspect can only have one charge of any charge per offense.

4. A suspect can not be charged with two crimes in the same horizontal row.

4.a For example, you can not charge a suspect for 100(Damage to Station Assets) and 200(Workplace Hazard) for one offense.

4.b Other crimes can be stacked like 102(Battery) and 105(Indecent Exposure), in this case their times are added together which would be a warning to ten minutes maximum.

4.c When you have two charges that apply to someone and both are similar, you give them the most serious crime. For example, if someone has a stechkin pistol, you would give them Possession of Contraband OR Possession of Restricted Weapon as they're both a Major Crime, but not BOTH.

5. The procedure for processing and brigging people.

5.1 While in jail, prisoners may have their headsets revoked if they abuse it.

5.2 All Vox and Plasmamen prisoners must keep their internal tanks at all times. If you remove it, they will die. If you need to remove it, do so, and place it back with haste.

5.3 It is important to routinely check Permabrig, Solitary, and the Labor Camp areas if people have been sentenced there.

5.4 Security is required to bring perma prisoners to departures at shift end! You never know if there will be an escape attempt, so plan ahead.

5.5 Any suspect attempting to or escaping from perma may be executed at officer discretion.

5.6 If the cells become an unsafe environment for any reason you should let go Minor-Major prisoners in danger or, if able, move them to another cell until crew transfer or the damage is repaired.

5.6.a Exceptional Prisoners and above should be moved to another cell or kept in custody until the damage is repaired.

6. Prisoners who are not charged with Capital Crimes or facing Permanent Imprisonment are not entitled to legal representation.

6.a Security is not required to provide or allow legal representation unless the Magistrate says otherwise. In their absence, IAA may so do.

6.1 The Legal Division, Internal Affairs Agents and Magistrate, are there to make sure civilians are properly sentenced and reasonable punishments are given for crimes.

6.1.a Internal Affairs Agents don't have any authority over the Brig, Security, Prisoners, or final sentencing. Attempting to do so will result in them being ignored or reported to their boss, the Magistrate.

6.2 If the IAA is asked to leave the brig by the Magistrate, Head of Security, Warden, or Captain due to being disruptive, they must do so until one of them allows them to return.

6.2.a Failing to follow this or continuing to be disruptive may result in the IAA's demotion. This can be done by asking permission from the Magistrate, if absent, then the Captain.

6.3 If multiple parties conflict in what sentence of a prisoner should be given, this chain of command should follow: Magistrate > Captain > Head of Security > Warden > Detective/Officer.

7. As a part of the Security Team, you are one of the few onboard that are legally and officially allowed to be armed with weapons in order to protect the station and its crew from threats to Space Law. There will be many cases when one decision may be life or death. And then other situations where non-lethal weapons may be more effective in subduing the threat than lethal options. With this being the case, it is important to know what type of force you should use and when.

7.1 Use of Force is your friend as an officer. These are the things you should be thinking of when you go against a subject.

7.2 If lethal force is used against a target that is not an EoC, like a cultist, or thrall, you should revive and sentence/deconvert as soon as possible. Any petty criminals met with lethal force are to be given immediate medical attention when captured.

((((In general, if it is possible to capture personnel non-lethally you should. If you do not, expect to have to justify yourself to Internal Affairs to not get fired and to Administrators to not be Jobbanned.))))

8.1 Here are a few ways you may get probable cause:

8.2 Here are the two types of witnesses and why they're important.

8.2.a It is important to note that personnel who provide false testimonies that lead to the death of a crew member (i.e. changeling) are to be charged with Murder or Attempted Murder depending on the state of the victim.

9. There will be suspects that are found to be working for the enemy of Nanotrasen, like the syndicate, or just in general want to overthrow Nanotrasen and its many stations.

9.1 The current enemies of Nanotrasen are seen in this list:

9.2 For the EoCs that do not fall under execution, or in other words are containable, and have not committed any Capital Crimes, they are to be put in permanent imprisonment.

9.2.a These are the following choices for permanent imprisonment:

9.2.b For the EoCs that willing turn themselves into security of their own accord, they are still to be kept in permanent imprisonment as long as their aren't impossible to contain.

9.3 If an EoC meats the requires for execution, it may be permitted at the whim of the Magistrate. Following that there is not one able to authorize such, the Captain may authorize it in their absence.

9.4 Is it important to note, being a space-proof species does not constitute being impossible to contain. They are still to be treated as dangerous enemies, but are also to be protected from retribution and provided for.

9.5 Parole can be offered to EoCs at the discretion of the Magistrate or Captain. All paroled EoCs are to be stripped of all their items and given basic civilian access.

9.5.a These are a few of the many things you should think about before offering parole:

10. These are the only legal means by which execution can be done:

10.a Other means are illegal unless requested by the prisoner. See Legal Standard Operating Procedure for more information regarding executions.

10.1 When the final sentence of someone due to combined charges exceed 60 minutes, their sentence is to be changed to permanent imprisonment.

10.2 As stated in Section 2.2, the point of Space Law is to protect the station and the crew, not hinder them. 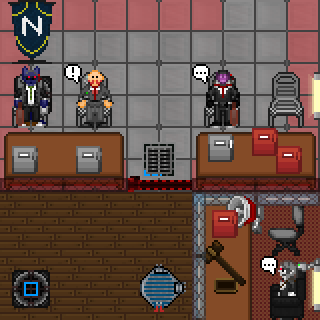 11. This chart you can quickly use to find the Crime Code Numbers you are looking for.

11.a Crime Code Numbers are organized by their Category Code (Side) which are the non-stackable crimes in a row, followed by the Severity Number (Top).

All of these crimes are punishable by ONE of the following: 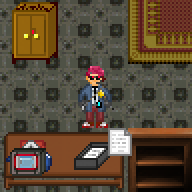 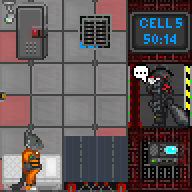 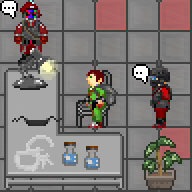 All of these can be added or applied to charges, but can not be applied alone.