From Paradise Station Wiki
Jump to: navigation, search
This page needs to be reviewed/updated.
REASON: Missing most of the commands.

This is a quick guide intended for new administrators. It does not cover everything you need to know but just the basics. Also note that the specific verbs and options from this guide will change over time as tools change, but overall this is what the main tools look like:

Accessed by typing the verb 'secrets'

This panel is used to check the specifics of the current round. The first section is the most important one as it has links to panels which show who antagonists are, AI laws + law changes, the manifest, game mode, etc. The rest of the list are events which you can trigger. At the end of the secrets panel there is a link to the admin log, available to full game admins. This shows a log of what buttons were pressed and who pressed them so don't muck around with these buttons - It's all logged. 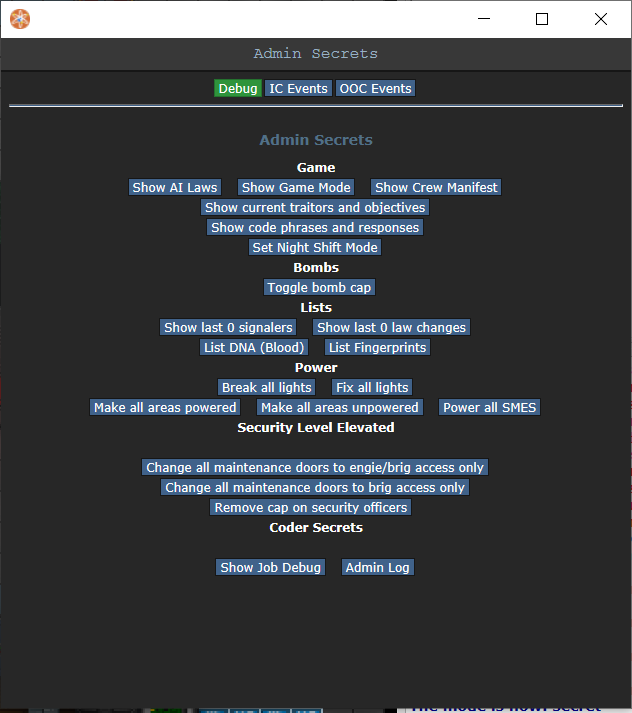 Contains a list of players with information about them. Most useful for finding players. There are two player panels available, each with their own good and bad traits.

Accessed by right clicking an item and selecting 'view variables'

Contains the interface for viewing and editing variables of objects and mobs and such. You can break the game entirely with this panel so take your time and learn what you can and what you mustn't edit! Use the search function to quickly access variables - it searches by both variable name and value. 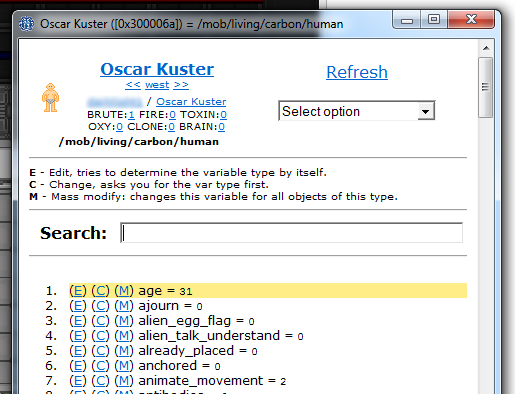 The panel also includes an 'extended options' drop down for the object you have selected. These are things that just don't fit in the right click menu due to it becoming cluttered.

One interesting variable is called "ckey," short for "client key." It typically only shows up in mobs that a player can control, but isn't necessarily limited to such things. Altering this variable isn't recommended, but if you choose to do so, be aware that it has a number of functions.

Deleting the variable can serve to kick the player out of the game, at which point they can re-enter without fuss or muss. Changing the variable to someone else's BYOND key will put that BYOND user in control of the mob. In that way, one can assign a player to be a monkey for a while, or create a body-switching scenario by abusing the "lastkey" variable.

Adminhelps arrive when players need help (they are OOC). Prayers when they pray (they are IC). The format is:

Confusingly enough there is another panel called the player panel. This one is accessed by right clicking a mob and selecting 'show player panel'.

It is a terribly made panel with just links. This is where the banning usually happens. 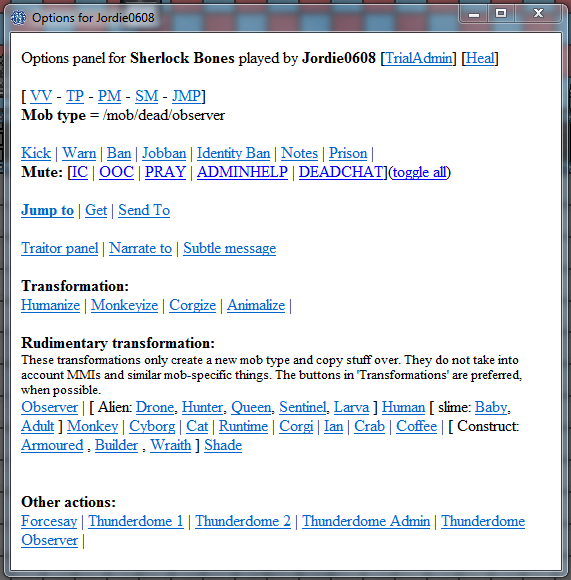 Contains the options to make someone an antagonist and specialize their role (objectives, equipment, memory, etc.). 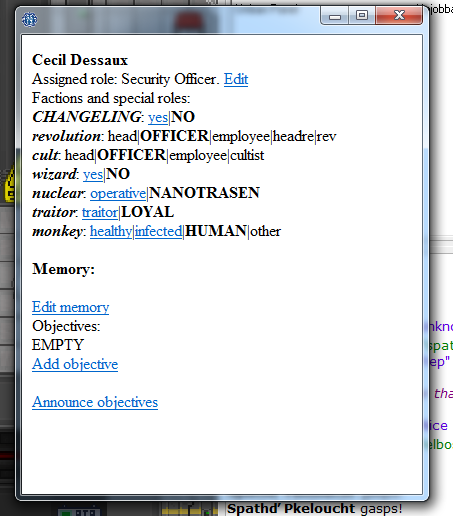 This is a simple panel used to set the game mode before the round starts and to spawn objects/turfs/mobs. It's simple enough to use.

These are the first verbs you should get to know. There are many more but these will always be important.