The Thermoelectric Generator (TEG) is an alternative method of producing power and can ordered from Cargo for 25 points. TEG's can easily power the entire station if set up properly, as they can generate upwards of 850+ million watts(or 850+ Megawatts) of power with a skillful setup, or around 8-10 million watts (or 8-10 Megawatts) if you're not going to use a burn mix along with ideal pressures and temperature. Unlike the Turbine, the TEG will require a bit more setup and construction. While there is not one "correct way to set up a TEG, this guide will cover one TEG setup that is made inside of atmospherics itself. However, know that the TEG can be made anywhere that you can gain access to plasma, a space loop or some other form of cooling, and some heaters or other method of making the room warmer than it was before as well.

Keep in mind the setup shown in this guide may not be the most efficient setup. For example, you don't necessarily need to make a 3x3 burn chamber; A 1x3 or 2x2 chamber could also work. Take the information you find here and experiment on your own!

Note: You do not need to use a plasma burn chamber for the hot loop of the TEG. It can be ran simply by using heaters and the space cooling loop in atmospherics for the hot/cold loops of the generator. Using the heater method will result in less power, so if your goal is to simply see how much you can push power generation, a plasma burn chamber will yield better results.

The TEG consists of three tiles worth of parts: The Thermoelectric Generator

itself, and the circulator/heat exchanger

parts to the left and right of the generator. The left circulator is for the cold loop, while the circulator on the right is for the hot loop, though this can be reversed by using a multitool on the middle machine. Both circulators take in gas from the south side and expel gas to the north side. To produce the maximum amount of power, you want the hot loop to be as hot and as close to the ideal pressure as possible and the cold loop as cold as possible. Note that, if the hot loop has too much pressure, the high pressure may congest the gas inside the pipes, requiring you to flush the hot loop out and find the ideal pressure, with the ideal pressure being something around 4100 KpA, in order to allow the engine to work at it's maximum efficiency. Keep in mind that, depending on how compact or how long the hot loop is, it will be harder or easier to get to the target ideal pressure, as shorter loops will fill up faster, leading to faster congestioning. so will longer loops fill up slower, allowing for a more precise control of the pressure.

Here is a more detailed over view of what's happening in the example setup picture. 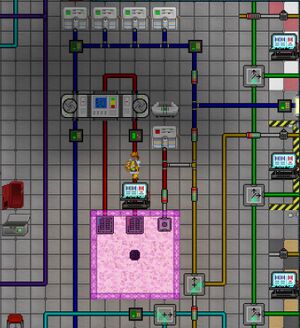 An example setup of a Thermoelectric Generator 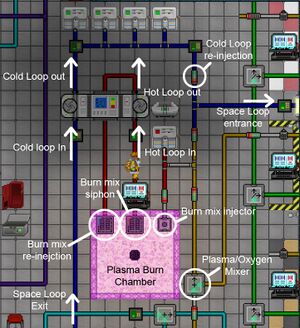 An example setup of a Thermoelectric Generator

The objective of the cold loop is to get a medium amount of pressure and lowest temperature as possible. There are basically three methods of getting your cold loop very cold. You can use

freezers, use a space cooling loop (one is setup already if you're using the atmospherics room) or use a combination of both. In the example setup shown on this page, a combination of a space loop and freezers is used. Once you have your method set up, just run the cold gas through the bottom input of the left circulator and hook the top output back around into your freezer or space cooling portion.

The objective of the hot loop is to get the highest amount of pressure and highest temperature as possible. Now while you can use the max temperature setting of heaters to heat your hot loop, it won't be very hot. A better, but less safer method would be to use a plasma/oxygen burn mix inside of a fireproof chamber. In the example setup, a small room with reinforced floors and reinforced plasma glass is used. Reinforced plasma glass is heatproof and will contain any reaction. It is also possible to use the incinerator or turbine igniter rooms for your burn mix, if you so wish.

Note: If you're not using a room that has an igniter, you will likely need either an upgraded heater or more heaters to light your burn mix, as one default heater wont quite work. Alternatively, you can throw a lit welder into the chamber just before you're about to pump the burn mix inside. Also, an air injector and computer was used to control the injection of the mix in this example. This is optional, and you can instead use a normal vent.

In this example, the plasma/oxygen mix travels toward the burn chamber and gets heated on the way there and then enters the chamber. Plasma auto-ignites at a certain temperature, so if you're using a heater to ignite the plasma, just crank the heater up all the way and the mix will ignite at some point. The heated gas then gets siphoned out and pushed up through the bottom of the right circulator, loops around, and then re-injected into the burn chamber, heating it up again. Note: To have a vent siphon, you can use an air alarm and switch the vent from blowing to siphon.

Generally, the more oxygen there is in the burn mix, the hotter it can get, use this to control the temperature and pressure you want to reach your burn chamber. In the example setup, a mix of 80% Oxygen and 20% plasma was used. You can set this ratio on the gas mixer

Before the TEG will function properly is needs to have a wire 'dot'(or node, for the nerds out there) directly under the middle portion of the three sections of machinery. From here, you can wire it up to a SMES

as not to overload the power grid with the massive amount of power you can produce. If you hotwire a TEG that is producing 5 Megawatts of power into the grid, the station's APCs will begin to shock people and electrified doors can explode and instantly kill people.

Once you have your TEG wired up to your SMES', they can begin producing power safely. Congratulations, you've set up a Thermoelectric Generator.

If you wish to see how much power you can possibly generate, simply add a few wires leading away from the TEG, but do not connect them to anything.