Setting up telecoms is easier then ever now after the NTSL2 changes.

Once you have the setting how you want press the "Save Config" button down at the bottom right and you're done. 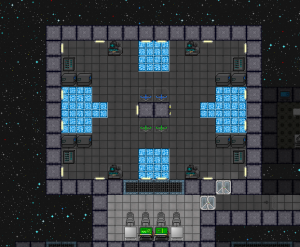 A basic example of a telecommunication central compartment. All essential machines, including a monitoring and logging computer, are present.

A functional telecommunication central compartment (otherwise known as the "Server Room") contains several machines, each with its own isolated function. These machines make up a usually independent telecommunication network, with a pre-specified array of frequencies to process. Optionally, monitoring computers may be used to keep track of telecommunication activity and network integrity. It is important to notice that the machines, most dominantly the Processor Units, generate a significant amount of heat. The central compartment is generally kept at a very low temperature to prevent the damage of the hardware infrastructure, so maintenance is usually not done without proper protective equipment.

A central communications compartment is not necessary for a functional telecommunications network. In fact, it may be more efficient to separate the network into sub-nets. Nanotrasen Tech Department, however, strongly suggests the centralization of the machinery for easier maintenance and bookkeeping. While a strong central compartment may be easier to maintain, it is also easier to sabotage or blow up. The only thing worse than explosive concussion damage and massive atmospheric de-stabilization is a downed communication grid. A central compartment should be well-fortified and stable, and fortunately for the crew, Nanotrasen cannot pinch for pennies in this department. The station will either receive a robust Communications Satellite or inner-station Server Room.

There are 5 different kinds of machines essential for a healthy telecommunication network. Without one or the other, the entire system would cease to function or would not function optimally. All telecommunication machines idle until they receive a signal, and all the machines are built with Hyperwave Filtering modules that allow for the scanning of signal's frequency regardless of intensity. This means each machine can selectively choose which signals to pay attention to, if there are any specified frequencies to tune into.

Subspace Receivers are essential to a subspace telecommunication network. They have a long-term subspace window open at all times, and create the subspace-equivalent of a gravity well in its warped version of space-time. FTL signals traveling in subspace are going too "fast" to be sucked into the gravity well, but a carbon copy of the signal is produced whenever a signal passes through the pocket. This signal is then converted into a real radio wave by the Subspace Receiver and passed onto all immediately-linked machines. In a typical scenario only Bus Mainframes would receive the signal. 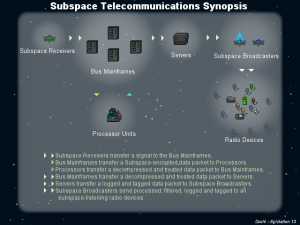 A simple visual synopsis of a basic radio telecommunication network. It shows the "route" a subspace transmission travels before it reaches its end destination(s).

Bus Mainframes regulate and handle the transfer of massive quantities of data at near instantaneous speeds. They are not essential to a network, but are required to keep data transfer instant. They usually transfer data back and forth between servers and processor units. If a Bus Mainframe is missing, network output may be unreliable or slow.

Processor Units decrypt, clean and stretch hyper-compressed radio signals. Radio signals are sent into subspace using a preset encryption hash but random seed, which makes the process of encrypting and sending very light but unpacking and decrypting heavy due to the weird nature of subspace. Processor Units can instantly make signals readable by other machines. They are not essential to a subspace network but if one is missing, network output may not be understandable.

Telecommunication Servers log network statistics and signal traffic for easy maintenance. Each server represents a "channel" in the Nanotrasen default settings. They can listen in to multiple channels, however. For each signal that is sent to a server, a database entry is created and the signal's information is stored. The servers also help by sorting the order in which signals are transferred to subspace broadcasters, which is vital for instantaneous signal transferring.

Additionally, Telecommunication Servers are capable of running user-written scripts through use of a Telecommunications Traffic Monitor. When a signal passes through a server (and the server is set to automatically execute code), the interpreter halts the signal until the code has finished executing, then releases the signal. During this time, the server's script interpreter can modify the signal's contents or flag it as a rejected signal, which will cause broadcasters to ignore it.

Subspace Broadcasters are impressive pieces of hardware that are capable of opening large enough subspace windows to transfer de-compressed data bursts, in encoded radio waves, through. They are necessary for any network that is expected to output information back to receiving radio devices. They operate by directing high-powered lasers into a small subspace window and fluctuating the amplitude of radio waves through subspace, allowing the large data packets easier entering and exiting of subspace.

Telecommunications machines are flexible and can adapt to structure changes, and they are otherwise immortal to mundane errors and crashes. However, in the event of a catastrophe such as an explosion, singularity, or anything of the like the default warranty becomes void and the machines will probably be destroyed or totaled. If one or more machines are destroyed, chances are the entire communication grid or at least part of it will be down. While intercoms and station bounced radios are capable of limited non-subspace communication it is most definitely not reliable. It should be maximum priority to get those machines up again.

If you suspect the machines aren't working properly (or at all), you should identify the cause first. Probably the most common issue is an exploded central compartment. Repair any structural damage and assess the machines. If they're still on (flashing/blinking lights, etc) then they are relatively functional. If there's been some atmospheric depressurization you're going to want to pump supercooled air into room; the machines need cold gas to survive or they will not be able to diffuse their heat into the environment, and will overheat. 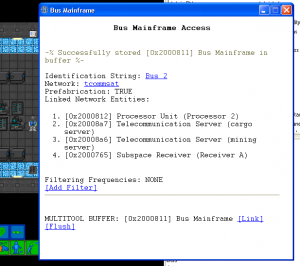 If the machines have been overheated, you can fix them by simply reconstructing them. To do this, first unfasten the exterior bolts with a screwdriver. Next, dislodge the plating with a wrench. Next, remove the internal cables with some wirecutters. After that, you can use a crowbar to remove the internal components and circuit board. From there, you can either deconstruct the empty frame or simply rebuild it. If the machines have been completely destroyed, you're going to want to build more. You're going to have to bug R&D for some really high-tier circuit boards and stock parts, or salvage some parts from other toasted telecomm machines. Keep in mind, you don't have to reconstruct ALL the machines. At the very minimum you need 1 receiver, 1 processor, 1 server, and 1 broadcaster.

The machines can be retrofitted manually to work with other machines that normally would not be very common or wise. In the case of an emergency, however, it can be a life-saver. You can use a multitool to interface with telecommunication machines, which will allow you to modify some of the machines' properties. You can also link together machines with this interface, which is possibly the most important function.

In order to link two machines, access one of them with your multitool. Select [Add Machine] at the bottom of the window to store this machine in the buffer of the multitool. Now access the other machine with the same multitool. The machine previously buffered should still be in the buffer of the multitool. Select [Link] to add the machine currently buffered to the list of machine links of the machine currently accessed. This will establish a link between these two machines. (Note that it is possible to link a machine to itself; this is both harmless and pointless.)

You can link Subspace Receivers to Processor Units if you are unable to link to a functional bus mainframe. This can and will create substantial network lag, because Bus Mainframes are needed for rapid information transferring and advanced port configurations.

You can link Bus Mainframes to Subspace Broadcasters if you are unable to link to a functional server. This will not have much of an effect besides a very miniscule performance decrease.

If you do not link to a Processor Unit, signals' readability will suffer substantially. It will also make it impossible to directly link to broadcasters.

You can link Processor Units to Telecommunication Servers if you are unable to link to Bus Mainframes. This will naturally have a significant performance cost.

These cannot really be linked to anything else other than a broadcaster. They are only needed to store logs and maintain sane bookkeeping.

These are ESSENTIAL if you want an output. There is nothing you can do with these in terms of polymorphism.

A useful traitor tactic to either stop your target using the radio, or luring the Chief Engineer to the area. Here are some easy ways to make nobody hear the screams of the station.

1.Turn off the coolers. If you read the rest of this post then you know that these machines overheat without the freezer running.

2.Destroy the sub-space broadcaster. Those screams will be uttered, But not heard.

3.Deconstruct the processor. This makes the radio blast gibberish that nobody can comprehend.

4.Deconstruct the server. Depending on which ones you knock out, you can disable most of the command channels and such.