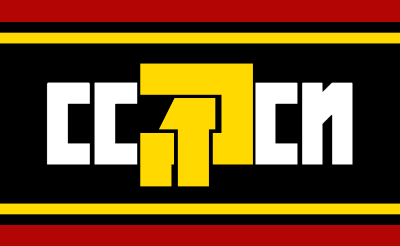 The triumphal banner of the Union of Soviet Socialist Planets

The Union of Soviet Socialist Planets (Also known as the USSP or Space Russia) is a minor human government-in-exile. Originally formed during the Cygni Rebellion, the USSP was quickly and decisively crushed by SolGov’s powerful naval forces, and was scattered to the cosmos in shards. Several of these shards eventually coalesced into the modern-day USSP, comprised of many of the same politicians that took up the mantle on Cygni Prime.

Today, the USSP exists beyond the range of SolGov’s considerable reach, residing on several dozen of space stations, planets, and colonies in the fringes of the known galaxy. Many of these stations and colonies are built as cheaply as possible, with cut corners and substandard construction materials often resulting in high-upkeep costs or their subsequent destruction. Despite their early setbacks, the USSP holds control of several outlying colonies outside the Trans-Solar Federation's sphere of influence, relying on the remote nature of many of their systems for protection against TSF raids or military actions.

Numerous USSP Citizens blame the Trans-Solar Federation both for the destruction of several stations, such as KC13, and for driving them out of the Cygni system. The USSP is presently recognized by the Trans-Solar Federation as a terrorist organization, though this hasn't stopped various organizations and corporations such as Nanotrasen from conducting occasional trade deals with them.

The USSP is considered by and large to be a politically neutral entity by most planetary governments despite their grievances with the Trans-Solar Federation. One of the few exceptions to this is the USSP's ongoing military actions against what they term "space fascists", often conducting raids on any and all companies known to be working with the Elysium Republic.

The primary governmental structure of the USSP is based upon the blueprint laid down by the Union of Soviet Socialist Republics, going so far as to appropriate the USSR’s flag, anthem, and language.

The primary governmental agency within the USSP is the Supreme Soviet, comprised of the Soviet of the Union, elected on the basis of population with one delegate for every 300,000 people in the USSP, and the Soviet of Nationalities, which has 32 delegates per installation, planet, or colony. The effective ruler of the USSP is known as the Chairman of the Presidium of the Supreme Soviet of the USSP. The current Chairman is the ex-Vice Governor of Cygni Prime, a human named Stukov Vedenin.

The USSP’s Military force is best described by the adage “Quantity over Quality.” USSP fleets are often composed of repurposed yet effective vessels such asteroid miners, starliners, freighters, or other such civilian ships. While ramshackle in appearance, the USSP Navy has proven itself an effective fighting force by virtue of sheer weight of numbers and blistering speed.

Most ships in the USSP Navy are specialized for extreme close quarters combat (under a kilometer between vessels), where the outdated cannon and boarding parties become much more viable options, creating the need for USSP vessels to close the distance quickly between themselves and their targets. USSP Navy Captains are given significant leeway in customizing their engagement style and hull configurations, with some preferring the “wall of lead” approach, while others strip down to a bare minimum of firepower so as to maximize the engine’s power-to-weight ratio.

The USSP Army is outfitted in much the same way, formed primarily through conscription and volunteers. There is a standardized uniform for Army forces, weighted more towards utility than appearance. The Army requires volunteers and conscripts to provide their own firearms, with only elite units being issued locally-produced AK-814 rifle variants. This has led to a hit-and-run, asymmetrical style of warfare by the Army, making veterans of the USSP forces desirable for numerous organizations.