Solars often are left alone by all but a few people, and for some other reasons. However, they are the safest way to generate power for the whole station. In the event of the Singularity Engine failing, or some other reason, the solars are sufficient to power the entire station, if set up correctly. 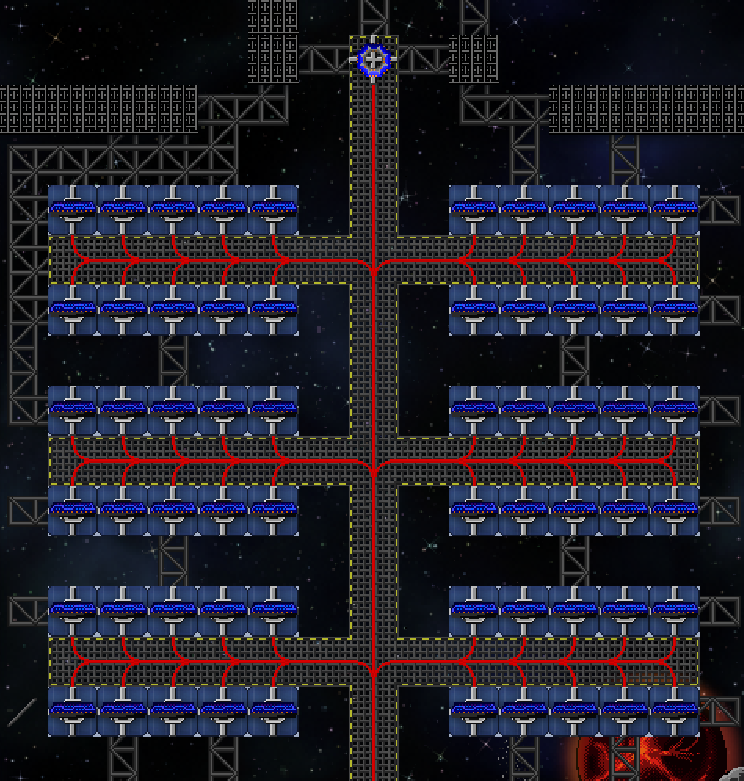 There are four solar arrays on the station. The first, and easiest to configure, is on the rightmost side of the station just below the escape shuttle port (Starboard Array). The second is located "north" of the chapel (Auxiliary Starboard Array). The third can be found to the left of engineering and south of robotics (Port Array). The fourth is best accessed by going through the left maintenance door of the tool storage area (Auxiliary Port Array).

None of the four solar arrays are connected to the station at the start. You will need to connect the solar panels and the solar tracker to the wire leading from the station.

To wire a tile, hold a cable coil in hand and click an adjacent tile, this will add a wire radiating from the center of the selected tile toward your current position. You will see a tiny red "knot" in the center of the tile, when extending the wire across the tile, make sure to click the knot in order to form a straight wire. Make sure the wire coil is in your hands when you click the knot (wiring is often learnt by trial and error).

Using this method, connect the solar arrays and solar tracker to the station. Having excessive knotting in your wiring can sometimes cause power loss, and other such nasties. Knots are best left avoided altogether for this reason - wire your junctions the same way the solar panels are already connected together, with the curving wires. You can also rewire the control room to remove the knots using this same method, especially if you're wiring the solar array into the main power grid (see SMES-less Solars below).

Once you have wired an array, you need to calibrate the tracking and power so that it actually produces energy. The station is rotating in orbit, which means that the solar panels need to constantly rotate to face toward the sun. Click on the Solar Control CPU and set it to auto-tracking. You should see a degree displayed at the top ranging from 0 to 359; this is the current direction of the sun.

The consoles are a bit glitchy so you'll have to turn off auto-tracking then turn it on again before the panels start to rotate. Also, auto rotation is not smooth, it jumps about every 20 seconds. Keep this in mind if it seems like nothing is happening.

You don't need to use manual tracking. The only time you will ever need to manually calibrate a solar array is when something destroys the tracking unit.

It is important to note that THE STATION BLOCKS SUNLIGHT! This is the biggest apparent cause of solar failure. When the panels of an array face the sun (and are correctly wired) they produce about 90,000 watts of power.

However, if the station is between the panels and the sun, they produce 0 watts of power. This means that as the panels rotate with auto-tracking, they move through a series of power levels ranging from 90k (full sun) to nothing (station obscures sun). The rotation cycle takes roughly 5 minutes to complete.

Why is this important?

Because of the SMES! See that big white thing in the solar control room? That's the

SMES cell. It's a battery used for holding solar energy and transferring it to the station. Click on the SMES and you get a window with input, output, and charging options.

A common mistake is to immediately set the input to 90,000 watts (the amount produced by full sunlight) and the output to 80,000 watts. However, this will not work. Solar batteries (SMES cells) start at 20% power but if the engine is off the station drains them to 0% in a few minutes. An input of 90,000 watts (full sun) might charge the battery for a little while, but once the sunlight is blocked by the station the battery charge begins to drain. This causes the battery to turn off and even when the panels receive sunlight again, the battery won't be sending power unless an engineer turns it on again.

After you have wired the array, set tracking to auto, and verified that the panels are indeed rotating, set the battery like so:

You want to leave output off and let the battery charge before you send the power to the station. Try waiting for a charge of at least 10% (maybe more) before you turn on the output. The battery needs this charge to provide sustained power during the dark phase of the solar rotation. If the battery runs out of charge, you'll have to turn it on again or it will not provide power. While you wait for the battery to charge, you can wire up other solar arrays on the station.

Alternatively, you don't have to set the output on at all. If the engine is up and running, you can leave the solar SMES charging just in you need it later.

When you need it, you can set the output to 50,000 - 75,000 depending on how much power you need. If the output load is equal to the output value you set, it means the station needs more power than it's getting. Crank it up!

These four arms can provide enough energy to power the entire ship in the event of an engine failure. But, given the position to the engine, the wires will likely be eaten away and you will have charging solars that aren't connected to the station.

A far more efficient way to configure the solars is to leave out the SMES cell entirely. This is done by cutting and rewiring the cables in the control room of each of the four solar arrays, so that they don't connect to the SMES cell or its terminal, and instead feed directly into the station's power grid. The practical upshot of this is that the solar arrays will supply the station with power constantly, whereas if they were connected to an SMES cell, power generated at any level lower than the set input would be lost. Setting the SMES cell to a lower input level would harvest this lower energy, but it would cause the cell to waste energy generated at peak times instead. Wiring the solars directly into the grid removes these problems and hence generates far more power! In fact, if you do this for all four of the arrays, then it's possible to power the station entirely on solar energy, making the solars a safer alternative to the singularity. This may be a good plan of action for the safety-inclined Chief Engineer, albeit an unorthodox one. Of course, the downside of this is that it's impossible to store energy without an SMES cell, so if something goes wrong with the arrays, the power will go out immediately. Luckily solars tend to be much easier to fix than more complex engines.

On the other hand, if you're planning on leaving the singularity running as well, you'd be best off not doing this method. The excess amount of electricity in the power grid would cause electrified doors to be lethal, and as a result is extremely dangerous! You should only wire the solars directly into the power grid if you DO NOT use singularity engine running as well.

There are a few dangers on the solars, one being the electrical wires! They can shock anyone manipulating or tampering with them, so wear insulated gloves at all times. Never forget or you will get zapped!

In addition, you are vulnerable and alone. This leaves you an easy target for space-walking attackers that need a new cover identity or you could be attacked by a Space Carp. Finally, there is the chance to slip and go drifting off through space. This hazard is easily solved if you act quickly. Simply throw something in the direction of your flight path, like shoes, or a pen. The equal and opposite reaction will start pushing you in the other direction!