Life on the NSS Cyberiad is far from perfect and sometimes downright awful. Occasionally citizens cannot find work or a crew member is viciously beaten by security and the crew's anger level begins to rise. This is to be expected, NanoTrasen has blessed the crew with the right to peacefully protest. However, from time-to-time, these protestors will turn violent once they realize their outcries falls on deaf ears or they are not satisfied with the outcome of their protests. It is up to you to remind them that civil liberties are not a right but actually a privilege that can easily be taken away.

Often, the most effective way to contain a riot is to stop it from happening in the first place. Communicating with the protestors and listening to them prevents bloodshed. If their complaint is reasonable then do what you can to ameliorate the issue. It often helps to call in a mediator such as the NTR, Magistrate, or Captain to facilitate diplomatic conversation. Keep Security Officers away from the protest until they're needed. An officer's presence is an opportunity for a brawl to break out. Don't do anything to make the protestors feel threatened and do not arrest anyone unless they are directly committing a crime.

Preparing For The Worst

Once it is apparent that the diplomatic option isn't working, you should take preemptive action. Order officers to equip pepper spray, flashes, stun batons, zip ties, and Security Holobarrier Projectors. Hold a mini-briefing session within the security department in order to share intel, assess the threat, and assemble a plan in case things turn ugly. If the protestors start throwing firebombs, disrupting traffic, or destroying assets the station should be raised to blue alert. At this point, you should be ready to move in. Use the Warden's megaphone to tell the protestors that they are now participating in an "illegal gathering" and that they need to disperse. Keep in mind that only the HoS, Magistrate, or Captain should declare illegal gatherings. After a minute, anyone who continues to protest is now considered a rioter.

Putting Down a Riot

Too often, security will focus on what's in front of them rather than the big picture. Set the department up for success. Begin by cordoning off areas around the protestors, make sure this cordon covers the entrance to departments as well as expensive assets. Holobarriers and the warden's security barriers are great for making this cordon. Always leave the main hallway leading to the center of the station open as a means of escape for rioters. The idea is that when the fight or flight response kicks in they always have an option to choose the latter and avoid a fight.

Going on the Offensive 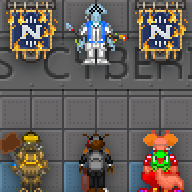 Before performing any arrests, listen to public comms and identify the ringleaders of the riot. Once this is done make sure their arrest statuses are set and their names announced to security comms. Formulate a plan for going in and make sure all officers are aware of their roles. Utilize tear gas grenades and non-lethals to quickly subdue and capture the ringleaders and bring them to processing. Make sure to remove their radios so they cannot continue to direct riots. Once this is done make sure to set the arrest status of every other rioter. These rioters can be dealt with later after the ring leaders are caught and processed as their status should already be set.

Tips for not getting robusted

Laying Down the Law

Once you have captured a few rioters you need to begin brigging them. The ringleaders should be charged with inciting a riot and their compatriots with rioting. In addition to these crimes make sure to include any crimes they committed during rioting. If someone smashes a window, add a damage to station asset charge, etc. Confiscate ear muffs, sunglasses, welding helmets, bowman headsets, and any contraband from them. When there is a large number of brigged rioters, it helps to set the cell times to the minimum for the charges. If space runs short, utilize the two solitary cells and/or keep prisoners restrained in processing under watch. If this is needed, make sure to keep a running timer. If this isn't a viable solution, then release the prisoners with the lightest charges.

More than a Riot

Once the rioters completely detach themselves from the chain of command and have resorted to violence, they are no longer an unruly mob but a direct threat to the station. Declare a code red alert and consider calling an amber ERT if security is not well equipped to handle this. While non-lethal weapons are preferable, officers are permitted to use lethals on armed and dangerous rioters. Considering deputizing personnel like the detective to assist you. Diplomacy is no longer an option and you should not attempt to meet the demands of the rioters. 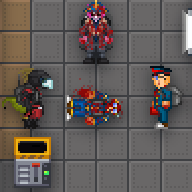 Security in these situations isn't in a great position to stand toe-to-toe with a large-scale mutiny. Before you do anything else make sure there is a station-wide announcement that makes it clear that any rioters who refuse to surrender to security will be captured dead or alive and possibly charged with mutiny. Security needs to develop a game plan beforehand so they are not slaughtered when they inevitably charge into the occupied area. Have medical on stand by.

It's time to play dirty:.

Get officers revived and healed as quickly as possible and secure the previously occupied area. Work with the magistrate to determine what crimes to apply to the captured rioters. Apply murder and mutiny charges as necessary. Otherwise, charge them with inciting a riot and include any additional Space Crimes committed on their list of charges. Once you've successfully quelled an uprising feel free to gloat over comms and continuously monitor those who weren't perma'd.

It is no surprise that people dislike being locked up. Occasionally, prisoners in permanent containment will attempt to escape or take control of the prison wing. This is usually done by turning the prison wing machinery into spears or slipping a bald officer. It is suggested to use the N2O riot suppression system unless they are species that do not breathe. Do not run into perma, Instead, throw flashbangs, and utilize your disablers. In the case, a large perma prison break is about to occur and there is not enough reinforcements, hit the prison wing lockdown button in the warden's office to provide more time to prepare before they get out

Occasionally, the crew is not rioting out of their own free will. Revolutionaries, abductors, vampires, and traitors may brainwash crew members and force them under their control. It is imperative that when this happens, once a riot is quelled they are checked for those implants/subversion and deconverted/dethralled. In this case, they are not the wrongdoer and should be pardoned of all crimes and possibly mindshielded to protect from further brainwashing.