Xenobiology is the breeding and harvesting of slimes and their extracts for scientific purposes. This all takes place in the xenobiology lab where you spawn, and is arguably more dangerous than making bombs if you don't know what you are doing. Which is a good reason to read this!

Home on the Range

As a Xenobiologist, you’re not going to get out much ever. You’re the most autonomous area on the entire station if you know what you're doing, and nobody ever bothers you (usually).

First, get familiar with your new home.

The workplace in the center includes a couple of closets with bio-hazard suits, a monkey recycling machine, a slime processor, and an All-In-One Grinder with several sheets of plasma. Also included is a smartfridge modified to hold slime extracts within easy arm reach from the slime processor. To the western end is a disposal unit that leads to space and right of this is the bread and butter of your job: The Slime Console, which will be covered later.

To the south is the slime containment area with six pens. Two of these pens start with a baby grey slime.

To the north is a special containment pen that's larger and more secure than the rest. This is ideal for containing and experimenting on other alien lifeforms should the station manage to capture/produce one. Usually though, it's just for storing extra slimes. Its just a normal pen now, for secure things use experimentor or scichem chambers.

Genocide Now: The Slime Console and You

The Slime Console is a semi-new addition to the Xenobiology scene that makes your job roughly a hundred million times easier. With it you can move slimes, kill them, feed them, and process dead monkeys with mere clicks of a button! If for some reason however you want to do Xenobiology the old-fashioned way the way your pappy taught you, then this guide will still help you.

General Advice on how to Not Get Eaten

Before you start breeding the slimes, make sure you have a fire extinguisher in your backpack. You'll rarely meet a ravenous, hungry slime if you're using the console, but it still happens and having an extinguisher could very well be the difference between a dead slime and a dead you.

If you aren't, then this goes doubly so as you'll be near a lot of slimes, usually before you cull their numbers, and while they're normally docile towards you whom are effectively their God, they occasionally grow resentful for their species' exploitation and try to kill you for no particular reason. In that case, kill the blasphemers with a clear conscience, DEUS VULT!

You should always have 1-6 slimes, depending on how many pens you are using. More and you can't control them properly. Less and your job is inefficient.

Time to kill your darlings. This is the part of the job that's most likely to get you killed.

Decide which baby slimes you don't want to keep and proceed to drag them into the tiny 'airlock' of the pen with you.

Once you have the slimes in position, simply spray them with water. They should die immediately if you're spraying them in the enclosed space.

Or if you are a smart person, you probally made a killpen. The two windows to space in bottom side of xenobio are a good location.

Or if you're too lazy to make a kill pen but don't want to grab your slimes manually when you want to kill them, you made a tiny glass chamber next to your seat and the processor so you can spray the slimes in an enclosed space from the comfort of your chair.

Rip My Heart Out

If you've been following the guide and diligently breeding and culling the slimes, you may have noticed that while the slimes very quickly attack and eat the monkeys you offer them, they have little to no interest in eating you. This is because you've become their "friend", a status that can be earned by hanging around line of sight of the slime and feeding it. It's a bit strange sometimes, slimes will rarely attack you for seemingly no reason, but if you're doing a good job you won't need to work for this.

There are, however, some commands you can issue as a slime's friend, including "follow" and "stop." Keep in mind however, these commands are exceedingly finicky, and are rarely used for a reason.

THEY'RE EATING HER... AND THEN THEY'RE GOING TO EAT ME! OH MY GOOOOOOOOD!

Slimes have three attacks: A glomp that does brute damage, with adults dealing more and a chance to stun, a shock attack that stuns and the most dangerous 'feeding' attack which empowers the slime and deals clone damage, a rare and very difficult to heal type of damage (that is, if medics are incompetent). If a slime starts feeding on you, wrestle it off with disarm intent and spray it down with an extinguisher (You DID get an extinguisher, right?) when you get it off until it dies. After that, hobble off to medbay for healing.

While this is generally more a tip for you when NOT playing Xenobiologist, in the event of a very rare slime outbreak, perhaps of sentient slimes, get an extinguisher and hide. A horde of angry slimes can multiply fast, and while slimes are normally unintelligent and docile, outbreaks of them are nearly always done on purpose by someone wanting to destroy the station, and are thus paired with usage of red extracts enraging slimes and/or light pink or black extracts making very deadly intelligent slimes. Pray that the AI is able to stop them, and that the xenobiologist who released the slimes doesn't follow up with something worse.

There are several a fuckload of different flavors of slime. You begin with two grey slimes but, you can breed them to catch all the pokèmon! slimes! Each kind of slime has its own powers from its extract.

Every time a slime splits by being fed enough, it has a chance to mutate based on it's individual mutation chance, a stat discovered by taking a slime scanner from the fridge and using it on the slime. It usually varies between 25% and 35%, but sometimes you will encounter slimes whose mutation chance is more like 15% to 17.5%. Choose carefully which slimes to keep! If you're breeding greys for monkeys, you'll want less chance of mutations, and if you want to get adamantines, you want to evolve them a lot! Keep in mind however that slime scanners are utterly useless if you're using the console, as the console has no scanner function.

This flowchart shows the results of each slime's mutations when splitting, with options labeled "2x" having twice the chance of occurring. 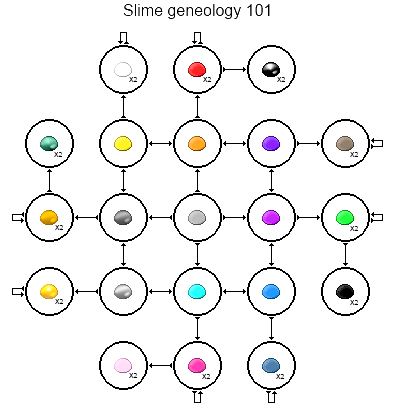 All injections require one unit of reagent. Dropper is your friend. Hover your mouse over the items for further information.

So You're a Traitor

What you can get here that can't be gotten easier elsewhere is an EMP and random hostile animals which include a few very deadly ones BEACONS SPACE BEARS ALIUMS SPIDERS HIVEBOTS PINE TREES OH GOD IT'S HORRIFYING. Releasing the slimes is somewhat viable, but you will likely get caught doing so, and baby slimes are rather tame (Unless you have Red Slime Essence. Then it's a party.)

On the plus side, you do have a disposal chute that goes directly to space. Pretty handy for disposing of evidence, or people.

Also remember the havoc with grenades and bombs you can cause! If you can get access to chemistry as well you can make some interesting grenades. Advanced mutation toxin with sugar in one beaker, phosphorus and potassium in the other. Set a timer in the Medbay and drop it and listen to all the people turning into Slimes. This is when you laugh to yourself and realize it backfires when all the slimes attack you.

A full guide to ruining someone's day with slimes: