Teleportation Machines and You

NT is an industry leader in Bluespace technology and its many ways of transporting, or teleporting, things from A to B without crossing the space between. As such, you'll find several teleportation machines aboard the Cyberiad and might wonder how they work and what they are good for.

The Dangers of Bluespace

Teleportation is no toy. Improperly used, it is easy to miss your destination by a few meters. When you work on a space station, that can mean ending up in space or, even worse, in engine containment. Always ensure all machines are properly calibrated before use and all coordinates are correct. A space suit may be recommended for cautious scientists. In addition, wearing any kind of bluespace storage item, such as a bluespace bag, can and will interfere with teleportation. Some facilities, like Centcom, also employ teleportation jamming which disallow unauthorized teleporting. 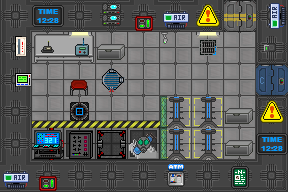 Probably the most used of all teleportation machines, these stationary teleporters are set to target special beacons. They can be found on station, in the AI satellite and at telecoms. More may be found drifting in space or constructed from scratch. Usage Use the console and chose a destination. Then click calibrate hub. Without calibration, the teleport will be very imprecise and might strand you in space. Once calibration is complete, click on the station itself to activate the hub. Then walk through the gate to get to your destination.

Setup This is only necessary if repairing a damaged setup or setting up your own. After construction the console, station and gate (see Guide to Advanced Construction), open up the station with a screwdriver and use wirecutters to link it to the adjacent console and gate, then close it up again. Your teleporter should now be ready for use.

A handy little device that can be found in the teleporter room and the captain's quarters, it is coveted by many and often stolen.

Usage Activate the device in your hand to bring up a menu. Here, you'll see a list of all currently active stationary teleporters, see above. The hand teleporter works by using their connection and target setup. As such, you can only jump to destinations that are currently being targeted by a stationary teleporter, aside from attempting a blind jump which has a high risk of just ending in space. For this reason, it is useful to memorize which number represents which teleporter and what it is targeting. After use a short lived portal is generated next to the user.

Not to be confused with telepads, despite the visual similarity. These devices are linked with one another and allow instant travel from one to the other. Sometimes used to link several areas of the station together for instant travel with little risks.

Usage Simple stand on the pad and click it to use it. You will instantly be teleported to the linked pad. Keep in mind the pads have a cooldown, so you might have to wait a bit if it was used previously.

A variant of the normal quantum pads that are present at roundstart at cargo, the mining station and in science. These pads are the destinations of Rapid Crate Senders used by cargo. Crates and lockers can be instantly transported to these pads.

Usage Click a crate or locker with the RCS, then chose a destination from the list that pops up. 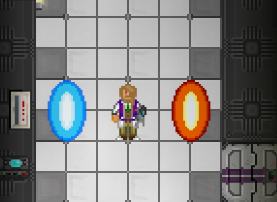 The orange and blue portals.

An extremely advanced piece of technology, this gun, also called the 'Bluespace Wormhole Projector' creates linked, orange and blue portals. Anything entering one portal is teleported to the other. Definitely not stolen from Aperture Science.

Usage Click somewhere to shoot a portal projectile. It will create a portal when it hits a wall or other obstacle. Alternates portal colors it creates. The sprite of the gun is of the same color as the portal it will create on the next use. Alternatively, using it in hand toggles between which portal to create next. Has unlimited charges, somehow.

A syndicate spin on NT bluespace technology, this traitor item can be locked onto the same teleportation beacons as stationary teleporters and then sends people shot with it to said beacon.

Usage Use it in hand to pick a destination. Then click on people to shoot the teleportation projectile at them. Does not work on inanimate objects. Can be recharged at a recharger like other guns.