Space Exploration and You!

The NNS Cyberiad is not alone in its orbit. Though it’s often not relevant to the goings-on inside the station, the cold expanse of the space around it holds many opportunities. Space is divided into regions called ‘Z-levels’ that are separated by a boundary wall. In total there are 8 Z-levels. This guide aims help you navigate, explore, and survive journeys through the harsh dark ocean of stars and space ruins.

This guide is most relevant to Explorers, as they are usually the ones leaving to explore the far reaches of space around the station, however, this guide is not limited to them, and is useful no matter what occupation you are. If you’re planning a trip to space, it is probably best to give this guide a read.

One of the most important devices in a space explorer's arsenal is a ‘GPS’. These small devices display the coordinates of its current location, the z-level it resides on, as well as all other GPS locations, and their respective Z-levels. Something that should be kept in mind when exploring these levels, is that telecommunications are only available where a telecommunication relay has been set up, which at shift start is both the Cyberiad (Z-level 1) and Lavaland (Z-level 3). GPS is the most effective way for people to know where you are located while traveling, so if you're in an emergency someone can find you.

A GPS can be named with up to four letters, via using the item and clicking ‘Set name’, and usually, it is best to set a unique identifier to be easily recognized. (Insert picture here) Once you have named your GPS, you will find three numbers next to the name, these represent your X,Y, and Z coordinates. 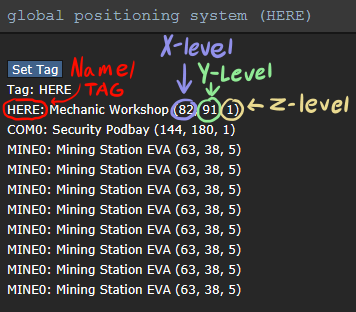 The first number is your ‘X-level’. This indicates your horizontal location within your current ‘Z-level’. It ranges from 0 to and 255. The second number, your ‘Y-level’, works exactly the same, but is vertical, with the south being 0 and north being 255. Using your X and Y coordinates, you can pinpoint where you are. These numbers are also found on crew trackers on the station.

The third and final number is your current Z-level. These range from 1 to 8. Z-levels 1 to 3 each feature structures within them which remain static and do not alter location within the Z-level. Z-level 4 is the gateway location. Z-levels 5-8 however, are unstable and will create random explorable locations within them, between shifts.

Traversing the Z-levels can be a confusing process. Once the shift has started, the layout of space is generated, and the Z-levels link up semi-randomly. For example, going off the East side of Z-level 5 may lead you to Z-level 6 one shift, but Z-level 4 the next. Therefore the clever space explorer makes a mental map as they go.

The most confusing aspect of space travel is the concept of Loops. A Z-level may lead to the other side of itself, rather than to a different Z-level, thus looping. This means, objects and explorers that go off of one end of the Z-level, could arrive on the other side. Not only is this very inconvenient for space travel, but people throwing things out into space might have them return to them moments later at high speeds. 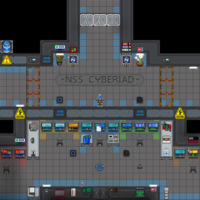 Home sweet chaotic home. The station is the only feature of this Z-level, not that it needs anything else.


The NSS Cyberiad is essentially the central hub for accessing any other Z-levels. Besides other bluespace means, it is currently the only way to get to Central Command, Lavaland, and any Gateway missions. It is a good place for space explorers to restock food, oxygen, and materials that are essential for exploring space. You may want to avoid or leave this Z-level if certain people are about to make the Cyberiad very uninhabitable 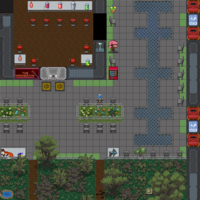 This Z-level is home to the higher-ups in charge of the Cyberiad. You have to be pretty important to be here. Besides being an ERT Member or on a visit by special permission the only way to get here is escaping the Cyberiad through Escape Pods or the Escape Shuttle. Central Command does not want any nosy space explorers poking around and you may meet an SOO who will ensure a quick demise if you're trespassing. ERT Ships are also known to rescue crewmembers back to Central Command from time to time but don’t rely on it.

The Gamma Armory is docked on this Z-level until the Cyberiad needs it and the cargo shuttle collects its cargo from this Z-level as well, though it won’t launch with anyone inside it (Yes, even if you hide in a locker).

Not accessible via space. 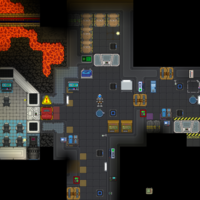 Home to miners and deadly creatures, this is the planet you see behind the station. Lavaland is quite unreachable, as it’s actually the surface of the planet; the only way to get to Lavaland is teleportation or the mining shuttle found in Cargo unless you fancy burning up in the atmosphere. This Z-level is one of the more unique Z-levels and is very unlike exploring space. If you decide to explore the surface, see the Guide to Mining. Lavaland comes with its own ruins and friendly inhabitants. Make sure to come prepared before coming down here.

For the most part, only the QM, Shaft Miners, and the HOP have access to get to Lavaland.

Not accessible via space

Space is not the only avenue of exploration. This Z-level is only available through the advanced technology on the Cyberaid known as the ‘Gateway’. There are many locations it can link to, each carrying a varying level of danger and reward, however, none are accessible via space. The Gateway leads to Z-level 4, but is a special circumstance, as where exactly it leads will always be random. It is unique, however, due to the fact that the Gateway is the only way in or out of the Z-level. The Gateway can either be a safe place that would be a fun location for the crew or an inhospitable area devoid of atmosphere and full of many many angry mobs. You need to be an Explorer or member of command in order to access this area.

Not accessible via Space. 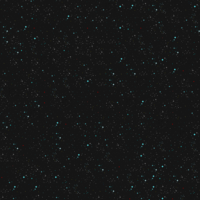 Z-levels 5-8 are largely unknown swathes of space. This dark expanse is, for the most part, empty; Z-level 8 is only space and contains no space ruins. In Z-levels 5-7 there are various derelict stations, scuttled ships, and ancient dangers. Venturing out here can give you a sense of just how small and insipient you are in the grand scheme of things. The atmosphere of these Z-levels can be described as eerie and creepy. It is up to you to discover the mysteries of deep space- you may even discover that you aren't alone out there.

The Various Space Ruins you can Discover(Spoilers)