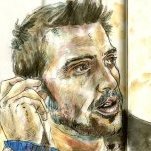 Just a Picture from our Bar/Kitchen Renovation.