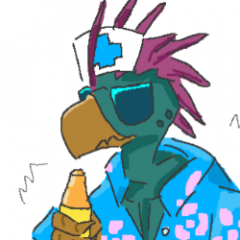 By SlimeBird,
January 8, 2020 in Graphics Section

haven't updated here as frequently as I'd like, but here's my big space station 13 piece to kick off artfight 2021!!

and now for vox art spam, don't shoot   Doodled chiki's old raider crew (she's on the right, uncaffeinated and un-quilldyed)   Drawn from the suggestion "behind the scenes SS

Haven't been uploading to forum as often as I used to, I've been drawing a lot and I got lazy   figured this one belonged here, though choose your fighter: paradise station medbay lineu